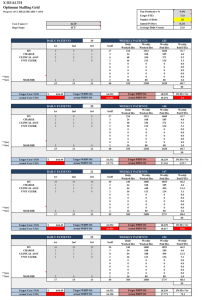 Just as the Optimum Nursing Staffing Calculator© illustrates variances on the budgeted average daily census, the Optimum Nursing Grid© takes the same approach, however, it illustrates the staffing based on a series of census levels that typically occur during the year. For instance, for a 30-bed unit there will be scenarios built for all the relevant census levels. These scenarios will include skill mix by shift and by cost. The Optimum Nursing Staffing Grid© acts as a roadmap for staffing as the daily and weekly volumes fluctuate. Specific Department Level Planning and Interpretation.